We visited the children’s ward in the Pilsen University Hospital 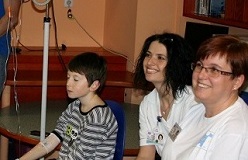 Finale Plzen Film Festival organized a Holiday surprise for the youngest patient in the Pilsen University Hospital. There was a special screening of Seven Ravens, a new Czech fairy tale, organized by the festival for the children on 21st December and there were gifts ready for the little viewers, given by the festival representatives.

The Finale Plzen and it’s new organizer, Film Servis Plzeň s.r.o., want to bring it as close to the general public as possible. “The hospital management welcomed us and so we came to the children in the hemato-oncology, psychiatric and neurology wards of the Pilsen University Hospital and organized a screening of Seven Ravens, a beautiful Czech fairy-tale. We also presented children with fairy-tale books,” described the festival director, Eva Veruňková Košařová.

“The children should be with their families for holidays, but when that is not possible, we are happy to make their stay in the hospital at leas a bit more bearable. We believe that our partnership with festival organizers will be a success and that we will feature more screenings in the hospital,” commented the University Hospital director, Václav Šimánek.

This event was not the last joint project of the Pilsen University Hospital and Finale Plzen. “We would like to follow up on the holiday screening, showcasing new Czech films within the hospital premises for adult patients as well,” added Veruňková Košařová. The organizers plan to bring in film delegations and give the hospital clients a taste of festival atmosphere and make them feel as if they were in Měšťanská beseda where the festival traditionally resides.